Susanna Reid today revealed how she was mugged at knifepoint but chased the attacker up the street until he dumped her handbag and fled in fear.

The Good Morning Britain presenter, 47, showed viewers how the knifeman ‘slashed’ the straps of her bag as she walked through Brixton.

The attack was so violent his knife also sliced through her coat – but just short of her chest and neck.

She spoke out as police chiefs condemned the ‘walk on by’ culture in Britain where many witnesses film violent scuffles instead of trying to stop them.

Ms Reid said her violent mugging left her ‘incandescent’ with rage, adding: ‘My instinct was to chase them down. I think it was red mist’.

The mugger became so scared he threw down her bag and ran, she said. 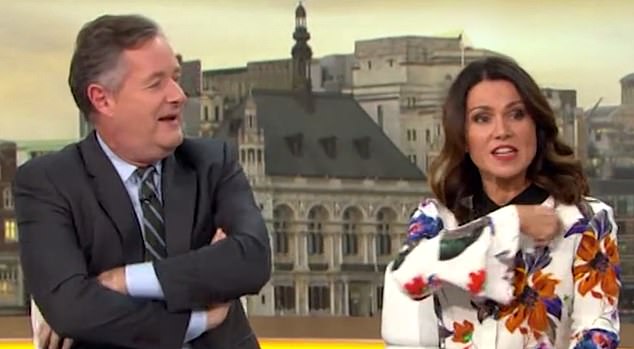 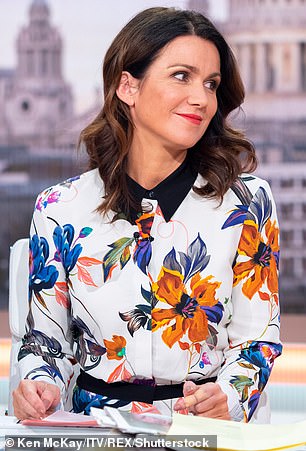 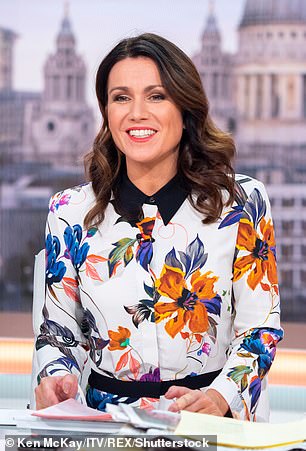 Her GMB co-host Piers Morgan looked shocked when she revealed the attack and said: ‘You chased them down?

She replied: ‘Yes, I was incandescent. He slashed my bag and coat with a knife and ran off. I was driven by fight of flight but I wouldn’t advise anyone else to do that.

‘He was running across a bridge and he was shaking the contents out of the bag. I had cash in there and he took that but I got my phone and my keys and stuff back’.

She added: ‘I went to an ID parade but I couldn’t pick out who it was. I wasn’t focused on that in the moment. I wasn’t really looking at him. I was just acting on instinct. I just wouldn’t let him get away with it’.

Susanna admitted that the mugging from 17 years ago left her traumatised for some time afterwards.

A police leader warned last night that frontline officers could let thugs go if the public fails to back them.

Ken Marsh, who represents almost 30,000 of the rank and file, condemned a ‘walk on by’ culture in which witnesses film violent scuffles instead of trying to stop them.

The Police Federation chairman spoke out after an appalling video emerged of a yob using a karate kick to send a policewoman into the path of a bus.

She narrowly escaped being run over in the incident in Wimbledon – the latest example of the violence gripping Wild West Britain. 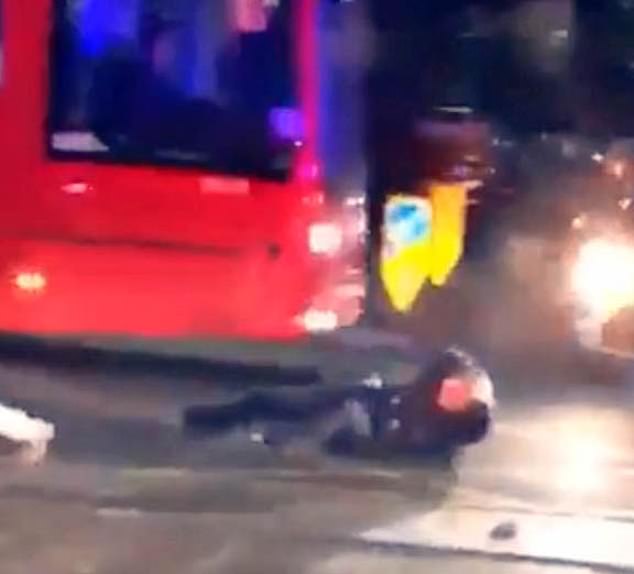 Police Federation leader Ken Marsh, who represents almost 30,000 of the rank and file, spoke out after a video emerged of a yob using a karate kick to send a policewoman into the path of a bus in Wimbledon 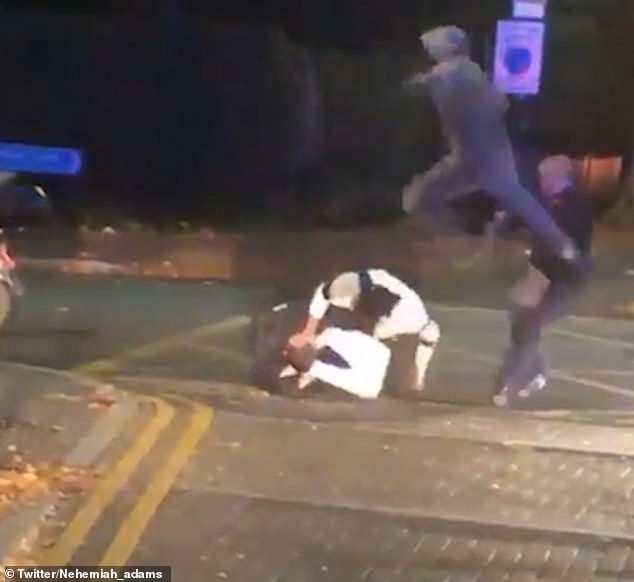 Although one member of the public tried to help, several cars went past without stopping and the person filming the attack did not appear to step in.

A string of sickening attacks involving machete, axes and guns have been caught on camera. 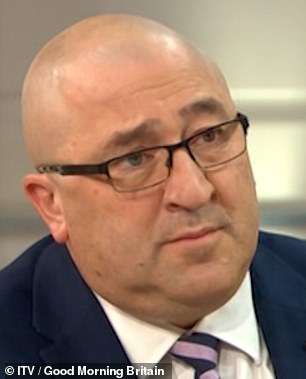 Ken Marsh, the Police Federation chairman, was on GMB today and said there’s something wrong when people want to film police officers being attacked

Police chiefs fear the incidents highlight a disturbing lack of respect for the law or fear for the consequences of confronting authority.

Mr Marsh said: ‘Are we now in a society where, if we think we can’t detain somebody, we just let them go? It’s just not worth it.

‘We’re going to come to a point where we’re going to start pushing messages out to our colleagues: ‘Risk-assess it dynamically and, if you think you can’t detain a person, just let them go.’

‘We don’t come to work to get assaulted, and if we’re not going to be backed up in what we’re doing then what is the point?’

The latest incident took place after a traffic patrol stopped a suspicious vehicle on a busy road on Saturday evening in south-west London.

As the two officers attempted to speak the driver, a scuffle broke out as he and his two passengers tried to flee.

The confrontation spiralled out of control as two of the men – both in hoodies punched and kicked the officers.

The male officer was dragged across the street, clinging to the driver’s legs. His female colleague tried to spray the men with CS gas but missed.

She was then hit by a running kick as she tried to help her colleague. 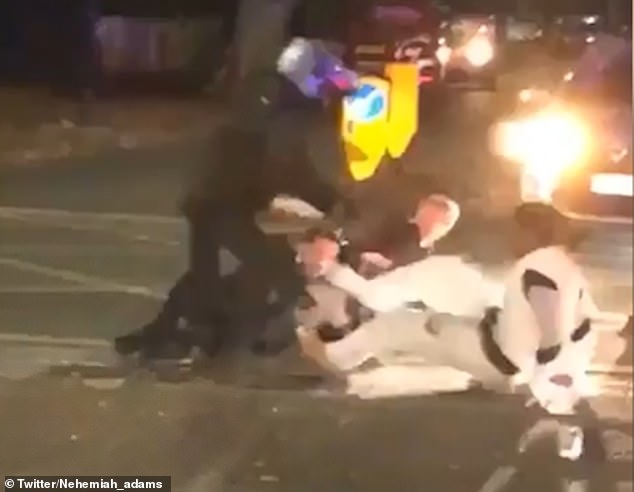 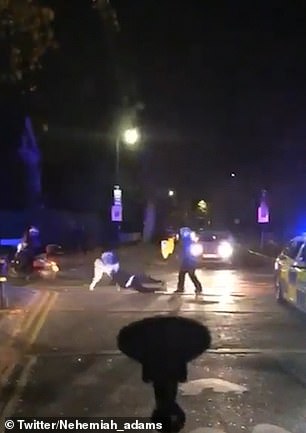 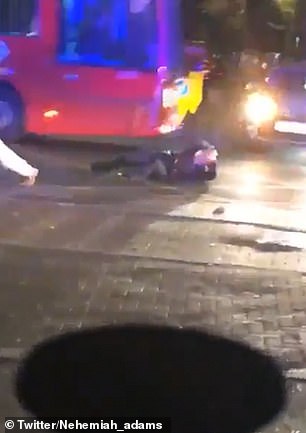 The clash was filmed by a motorist, whose failure to intervene and flippant running commentary sparked uproar.

The incident was videoed by a motorist, whose flippant comments and failure to intervene caused fury.

As the mobile phone footage unfolds, the man filming it says: ‘They are all fighting… look, they’ve got him. She’s spraying them up. He’s hanging on to him! Look!

Police have pointed to links between violence and so-called county lines drug networks, where urban dealers force children and other vulnerable people to courier illegal substances to customers in more rural areas.

They are also known to take over innocent people’s homes to use as a base for crime.

Middle class cocaine users have come under fire from a number of public figures, including the country’s most senior police officer Scotland Yard Commissioner Cressida Dick, who pointed to the misery caused by the drugs trade.

Drill music, where rappers taunt rivals with lyrics laced with violence and threats, and the role of social media in escalating disputes have also come under the microscope, as have cuts to youth services and the police.

A breakdown of the first 100 murders showed only a quarter were thought to be gang-related.

‘Oh dear me, he just kung fu-kicked her in the head! Look! I am getting this all live, boys and girls, I thought I’d just stop and have a little watch.’

After it was posted on Twitter, there was anger that the man didn’t help the officers.

One critic tweeted: ‘If it was the other way round, there’d be riots. Have some respect.’

Another said: ‘Shame on you for… not trying to help.’

The mobile phone footage showed the officer being bowled over into the path of a passing bus, whose driver was forced to perform an emergency stop.

The number of killings in London so far this year has already soared past the total for the whole of 2017.

A week of violence in the capital earlier this month – and two further suspected murders yesterday – have taken the total number of homicides to 121.

It means that with more than a month left to go until the New Year, the total is already above the 118 homicides seen in the capital in 2017.

A year of bloodshed has seen 68 stabbings, 12 shootings and two deaths involving a knife and a gun.

In February, London’s murder rate rose past that of New York, with Scotland Yard looking at 15 suspicious deaths and the NYPD investigating 11.

The murder rate surged again in the week from October 31, when there were five fatal stabbings.

Earlier this month, in the space of a week, Rocky Djelal, 38, was fatally stabbed in Rotherhithe, 15-year-old Jay Hughes was killed in Bellingham, Malcolm Mide-Madariola, 17, was was fatally knifed in Clapham, Ayodeji Habeeb Azeez, 22, was murdered in Anerley, and John Ogunjobi, 16, was killed in Tulse Hill.

Experienced detectives say they have shocked by the volume of violent crime and ferocity of some attacks in the capital this year. 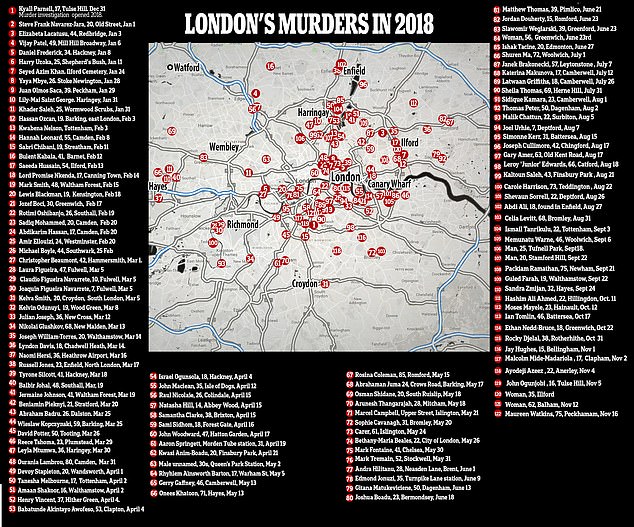 Mayor Sadiq Khan has been criticised for failing to do enough to stop the violence.

He announced plans for a Violence Reduction Unit that would adopt the public health approach to tackle violent crime that was successfully used in Glasgow.

The Metropolitan Police Violent Crime Task Force has meanwhile seized 340 knives, 40 guns and 258 other offensive weapons in its first six months of operation, and making more than 1,350 arrests.

The Home Secretary said it is his personal ‘mission’ to get the carnage under control.

He said the UK needs ‘immediate action’ to combat the ‘disease’ of violent crime and urged police to make fuller use of their stop and search powers.

The Treasury is under massive pressure to find extra cash for the police after officer numbers fell by 20,000 since 2010 while funding was cut in real terms by a fifth over the same period.

He told ITV’s Good Morning Britain: ‘Police numbers have to be an important part of the solution. Let’s not pretend that it’s not.

‘There has been a big increase in police funding in the last three years.

‘There was a big increase last year. That said, I’m the first to admit, we need to take a fresh look at that and make sure that police – not just in London, but across the country – have the resources that they need.’

He said he wants the Government and public agencies ‘to look at it as a disease and say: ‘How do we eradicate this disease?”

Mr Javid took a swipe at London Mayor Sadiq Khan’s claim that it will take ‘ten years’ to tackle the violent crime epidemic in the capital.